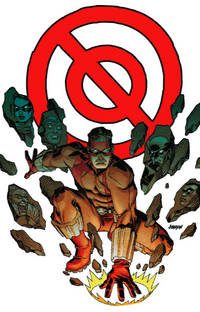 Brion Markov is the king of Markovia. Thanks to breeding and science, he has the powers of the planet Earth, including gravity, earth control, lava blasts and super-strength. This royal blooded hero is also a founding member.He has also been a member of the Justice League.

Gravity Manipulation: Brion is able to tap into and manipulate the Gravity of the Earth itself, to either strengthen or weaken its effects. He can apply this in two main ways, firstly on a specific object, either making it greatly heavier to say pin an opponent under their own mass, or lighter to lift some titanic object. Secondly there is a more area based use, for example turning gravity up in an area to make it impassable or allowing his companions to leap across a canyon by dropping gravity across it. This requires varying level of concentration, the larger the object or the area he is trying to affect and the greater the change from the natural levels. Although it is comparatively easy to cause null gravity but increasing the level of gravity requires progressively more effort and focus. So although it is only a mild effort to say force three or four ordinary people to the ground. It would take complete focus to say use his powers to suppress a mob or pin a Metahuman, anyone with a strength level of six or above he can’t pin even with no distractions and great effort, they would though find their limbs heavy and their movement slowed. In terms of the area the largest he is able to affect, again only with total concentration is approximately that of a circle one hundred meters in diameter.

Geokinesis Geo-Force has control over the Earth and can transform the consistency of earth and rock. He can use this power to cause earthquakes, tap into lava flows and levitate or create shapes out of solid rock. Apparently kicking in when wounded or in dire situations. Recently he has shown the powers of his half-sister Tara Markov but only under stress, so far only Black Lightning and Vixen are aware of this and have been asked to keep it a secret. Brion has shared his secret with Superman, Wonder Woman, and Batman and later discovers that Deathstroke is somehow responsible for Geo-Force's new power.

Lava Blasts: So named for their source rather than their appearance, in much the same way that Brion is capable of channeling the heat from within the earth through his hands. These blasts normally come out at around 900°C although with a little effort he can drive them all the way up to 4,000°C. With his feet planted on the ground and with total concentration he can bring them up to the highest temperatures found in the Core itself 6,000°C. Though this requires concentration. He can use this power in either direct blasts or to merely raise the temperature of his hands. Normally when he uses this his hands tint red although the higher the temperatures the brighter they turn, till they are white hot at full power.

Flight: By using his null-gravity power on himself coupled with lava blasts for propulsion, Geo-Force can fly at great speeds for short periods of time. He can fly up to 500 mph, but not for more than 1000 miles at a time.

Regeneration: Geo-Force can apparently be wounded or even killed, though as long as he is buried in earth. The Earth will nurture Geo-Force, healing his wounds and essentially "recharging" him.

Superhuman Strength: This varies; with his feet firmly rooted on solid ground and amping his abilities with his Gravity based abilities he is comparable to Superman himself, though on the main he is more of a peer of Wonder Woman.

Superhuman Durability: Although he is bullet proof they will leave a bruise, akin to a paintball bruise on a normal human, he is though more resistant to blast trauma and blunt force trauma.

Politician: Brion was raised in one of the richest political families in Europe, as such he is knowledgeable about political institutions and about Global markets, as well as more trivial matters such as which knife to use and what to call your aunts cousin.

Skilled Leader: He is also a skilled leader, both of teams, military forces and once of a country.

Aviation: He can also fly a plane.

Strength is supposedly at the level of Wonder Woman.

Earth Connection: While Geo-Force is at his strongest when he is firmly on solid earth ground, his powers and health will deteriorate if he is taken off earth for a long period of time. In such instances, Geo-Force will die unless he returns to earth in time.

Retrieved from "https://dcfanfiction.fandom.com/wiki/Brion_Markov_(Earth-X0)?oldid=31313"
Community content is available under CC-BY-SA unless otherwise noted.