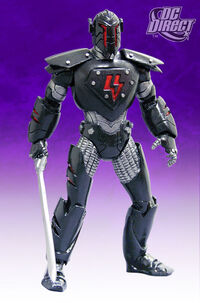 Jason was the oldest of the three, and was the first to be encouraged to be the next Superman. Like his brother and sister he had the powers of his father. He was soon spotted by Darkseid and was taken back to his homeworld to become the newest Destroyer of Earth. He was raised to be ruthless and show no fear to his enemy. When he was old enough he was to fight in a battle to be chosen who will become Darkseid's top warrior. Challenge after challenge and soon he had finished through all the challenges and won the title. He was soon takn to earth to liv as one of their own. Darkseid only took him to show him a facility known as Black Creek, where Lex Luthor kept his Meteor Freaks. Darkseid gave him a mission to make a group of them and take over that world, but slowly to see the pain in the citizen's soul. He later broke them out and was able t call the group Black Apokolips, and himself Black Creek. He sent them out to go against the JLH and made Suprememan follow one of them. He soon found himself in the lair of the Black Apokolips and had a face off against Black Creek. Black Creek was able to defeat him, but he didn't kill him. One of the team mates asked why didn't he kill him, but he didn't know why. At first he started to see him in a vision and thought he has a connection with him, but all he said was because he's is an important link to the League.

He can pick up something as large as a planet.

A space rock from his home planet that makes him weak.

Retrieved from "https://dcfanfiction.fandom.com/wiki/Black_Creek?oldid=33123"
Community content is available under CC-BY-SA unless otherwise noted.