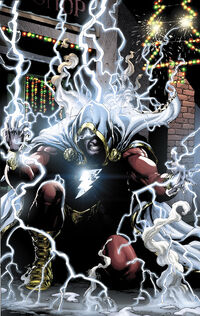 Class 100 +. As Captain marvel his strength is on par with Superman. When he received the upgrade to Lord Marvel and became the keeper of the Rock of Eternity he was one of the strongest beings in the Universe.

Retrieved from "https://dcfanfiction.fandom.com/wiki/Billy_Batson_(Earth-X0)?oldid=31725"
Community content is available under CC-BY-SA unless otherwise noted.