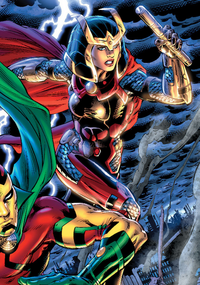 New God Physiology: The beings of New Genesis call themselves Gods and live outside of normal time and space in a realm called the Fourth World. These New Gods have evolved due to their close proximity to the Source, a primeval energy, believed to be one of the ultimate foundations of the Universal Expression of Energy, along with their superior technology, into beings of genetic stability and evolutionary perfection. The denizens of New Genesis are immortal, stronger, faster, and smarter than homo sapiens, despite their resemblance to the same.

Super Strength: Barda's super strength comes from her heritage as a member of New Genesis, where all of the people of that realm are genetically superior to normal humans in their physical characteristics. She was later augmented by Darkseid to further increase her strength and stamina at least by twenty-fold. Barda's strength is nearly on the order of Wonder Woman's, easily able to lift a weight surpassing 100 tons.

Super Stamina: Barda's stamina and endurance is nothing short of amazing. Due to the naturally exhausting and extensive rigors of her life on Apokolips, Barda is able to manage her stamina on a certain amount of rest and sustenance (more than minimal) so that it seems she is able to constantly function, though this is not entirely the case. Tied directly to her strength and invulnerability, even her immunity to a certain extent, Barda can actually function at peak efficiency for almost 48 hours before needing to eat and rest off the stress.

Immortality: Barda was born in the year 1748 (As far as Earth dates go, anyhow.) Like few other of the New Gods, Barda is functionally immortal, having ceased aging physically near the age of 30. Unless she falls in battle, Barda is immune to the ravages of time, and could easily live for thousands upon thousands of years.

Invulnerability: Even outside her armor, Barda is fairly difficult to damage. She is resistant to blunt trauma like punches, kicks, and blows from weapons like bats and maces, though not -completely- immune; unless the blows a dealt by a being with similar or greater strength than Barda, there just isn't a chance of injury. However, her invulnerability does not extend to bullets, laser-blasts, or other piercing/slicing weapons - her invulnerability is more akin to that of an Amazon, rather than a Kryptonian.

Radion: New Gods are vulnerable to a substance called Radion. It source is unknown and its effects are toxic only in sustained amounts or after explosive exposure. The average New God can be slain by an application of Radion from a Radion blaster or bomb. More advanced beings such as Barda, protected by their mother box, armor and sheer toughness, have been known to take two hits and survive. Because Radion is a rare material New Gods are not particularly wary of it during regular combat.

Retrieved from "https://dcfanfiction.fandom.com/wiki/Big_Barda_(Earth-X0)?oldid=31309"
Community content is available under CC-BY-SA unless otherwise noted.