Bella Marie Nunez is a former contract killer who made her living by killing assigned targets. An accident in the small town of Pueblo in Puerto Rico, caused Bella to gain fire abilities through toxic radiation. When she awoke she had no memory of the events. She was in a health care facility under the eye of Cain Industries. Through a program she was brought to Gotham to be used as a hero under Batman's guidance. Bella would become a great ally to the Caped Crusader and other heroes as well. She is the leader of Savior Core. 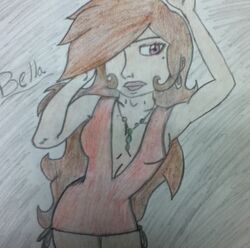 Bella was once a normal human haling from Puerto Rico. It is unknown how and when she became a hit-man. She was a contract killer until an accident that wiped out a large portion of a city occurred. After waking up in a hospital, Bella was arrested and taken to trial. The hospital and authorities wished to use Bella's new found fire abilities in the "Hero Outreach Program". She was transported to Gotham. There she allied herself with her current mentor Batman. Bella is capable of harnessing fire and can control that fire through syndicate gloves that control the fire abilities stored inside of her. She is also capable of running at high speeds thanks to her boots. Bella is shown to be an excellent marksman weidling two pistols Bella's full name is Bella Marie Nuñez. Bella leads her own group known as "Savior Core". She gives membership to young meta-humans in need of a place to be or a place to use their powers for the greater good.

Control of Fire: Thanks to her "Syndicate Gloves" Bella can control the fire that she wields within her as a weapon. She usually uses this with immolation, causing a roar of flames to shoot up from around her to attack her foes. Super speed: Thanks to special electromagnetic properties, Bella can use her boots to run at incredible speeds. While not as fast as Flash, her movement allows for quick getaways or a strong offense.

Incredible Accuracy- Bella's deadly accuracy is though to be an ability of it's own. Her capabilities with a gun are remarkable. She is able to hit two targets in one shot, and is more than capable of using two guns at one time.

Bella is an extremely useful asset to her allies. Her beauty and ability to seduce targets allows her to gain many allies and gain valuable access. While she isn't remarkably strong, Bella is incredibly fast both physically and mentally. She has near-perfect aim, and controls fire.

Bella isn't very strong, and this goes along with her defense. She is also extremely weakened by ice, and it is said to be her only true fear. Bella has a hard time trusting people or forgiving those who have betrayed her. For now, Bella's body isn't capable of taking in enough oxygen to fuel the flames within her as well as her body. Without the O 3 cartridges in her Syndicate Gloves, Bella's major organs can shut down. Without her boots, Bella looses the ability of super speed.

Equipment: Bella wears a bullet-proof latex jumpsuit which allows for extreme flexibility and movement. Secondly Bella has access to a few of Batman's arsenal tools, but not many. Bella also has her Syndicate Gloves, and Super speed Boots.
Transportation: Bella runs at super speeds to reach her destination.
Weapons: Dual Pistols - In combat Bella wields two pistols. Then can even be charged with fire to shoot small fire bullets at opponents.

Retrieved from "https://dcfanfiction.fandom.com/wiki/Bella_Nunez?oldid=6046"
Community content is available under CC-BY-SA unless otherwise noted.