Batman Beyond is a fan fiction film based on the great animated series with the same name.Although the animated series is after the New Batman Adventures this movie will take place after the 1990s live action bat film called Batman and Robin.The story starts of with an elderly Batman who is fighting crime with a heart attack.His heart attack made him do something that made him betray the Justice League.After he saved the hostage that was being held captive by crooks he quit his career as Batman.20 years later Bruce Wayne is in his late seventies and is living at the Batcave with a guard dog named Ace.Ace is a great dane.But there are new crooks in Gotham known as the Jokerz.Joker is dead and Harley Quinn disappeared but the Jokerz are much like the Joker.But they are ruthless insane gangsters.Dee Dee the twin grandaughters of Joker and Harley are members of the Jokerz.Bruce hires a 17 year old Gotham highschooler named Terry McGinnis to be the new Batman.Terry defeats the Jokerz.His father Warren McGinnis was murdered by an evil supervillain known as Blight.Blight has cosmic skin and his body glows.And Batman II must fight Blight and win.He wanted revenge since Blight killed his father.Bruce's heart attack was cured.Either Shia LaBeouf or Robert Pattinson will play Terry McGinnis.Robert Pattinson is British and they made Joker british before so why not make Batman British?Micheal Keaton will play Bruce Wayne.Jim Carrey might play Blight.Ace seems to be the new Batmans sidekick. 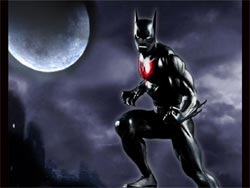 Retrieved from "https://dcfanfiction.fandom.com/wiki/Batman_Beyond_(live_action_)?oldid=3391"
Community content is available under CC-BY-SA unless otherwise noted.