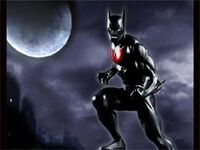 When Bruce Wayne was 8 his parents were gunned down right in front of him. He then decides to fight crime. So he trains around the world. He comes back to Gotham and becomes Batman. One day he watches another boy's parents being killed. Bruce takes the boy in and trains him to be Robin. Batman later battles the head of Gothams underworld the Joker. Batman and Robin spend along time battling Joker and other gang lords such as Penguin and Two-Face. Robin later leaves Batman to become Nightwing.Batman later gets a new Robin named Jason Todd, who is his illiginimate son but he is later framed by The Joker and Clayface. Batman also joins the Justice League and has an affair with Wonderwoman resulting in the birth of Donna Troy Betond. Bruce later meets the love of his life Selina Kyle AKA Catwoman. Batman eventually dismantles The Jokers empire once and for all and sends Joker to Arkham Asylum. Batman then retires, marries Selina, And has a son named Nathan. Bruce and Selina later die. The circumstances are unknown.

Strength level of an olympic level athlete who is advanced in martial arts and who also exercises regularly.

Retrieved from "https://dcfanfiction.fandom.com/wiki/Batman?oldid=6664"
Community content is available under CC-BY-SA unless otherwise noted.