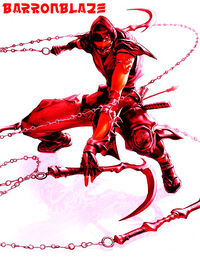 ORIGIN Born to the emporers 1st general and Lord of the barron warriors, Daniel gordon Estrada aka Lord Barron. And Lady Laura Rivera-Estrada lead scientist of the barron serum. Jose grew up in the rich life and was trained to be a great warrior and ninja who was destined to join the greatest warriors known as the barron's.

The Academy The greatest teen fighters are sent to a special school to further there intellect and fighting skills, Jose was accepted at the age of 12 the youngest ever to be accepted. Jose spent the next 6 years at the academy and is one of the top warriors there and is in line to be drafted to the barrons. The annual Tournament to decided which two top seniors will join the barrons begins and joses rival since they were kids Dami Bentaly aka Barron X has signed up. Jose faces 12 different fighters to receive a spot as a barron and in the final match against Dami. In the end both are knocked out at the same time and are both named champions. After the tournament both dami and jose meet on the street with there gangs and an all out brawl ensues leaving jose paralyzed below the waist and dami badly burnt. Dami and jose are rushed to the barron headquarters were they are injected with the barron serum and are both completly healed within a week.

Barron Warrior After Jose and dami are healed they both awake to find that they are better then they were before and have gained superhuman Physical abilitys.

Battle for the Empire

Like all people in Spirtro, newborns are fed a special herb that gives them the ability to manipulate heat and fire

Decapition/Fire not under his control

Retrieved from "https://dcfanfiction.fandom.com/wiki/Barron_Blaze?oldid=5637"
Community content is available under CC-BY-SA unless otherwise noted.