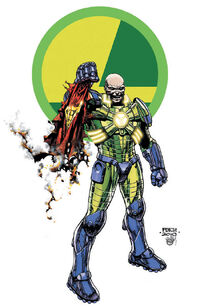 Lex Luthor, Superman's arch-nemesis, is one of the most gifted beings alive, whose hatred of "interfering aliens" pushes him down the path of a sociopath. Known for his "ends justifies the means" approach to life, his single-minded and often brutal focus puts him at odds with The Man of Steel.